We designed an ‘intermodal park’ to replace the old railway station area of Debrecen, Hungary. All around the world, these huge centres usually emerge at the intersection of railways or main roads and appear as functional and logistical facilities. However, in this special case, the connection to the pulsing city life appeared to be a primary interest of the local community. Our concept earned an honorable mention award in the architectural competition for the rehabilitation of the industrial transit hub.

It can also be considered as the city gate because a lot of visitors gather their first impression of the town at this point. Being a regional centre for agriculture, this town has a strong identity, which is formed by its traditional buildings like the Great Reformed Church of Debrecen located in the heart of the city and being surrounded by wide streets and green areas. This is where ‘Piac utca’ (in English: Market Street) starts, as the main platform for city life, and crosses the city to the south with plenty of restaurants, bars and cafés on both sides. It leads exactly to the project area: the railway station and the chosen plot for the new intermodal hub. However, the plot is cut off by a huge, six-lane road, which intersects ‘Piac utca’. In our competition entry, our essential concern was to disentangle this Gordian knot. 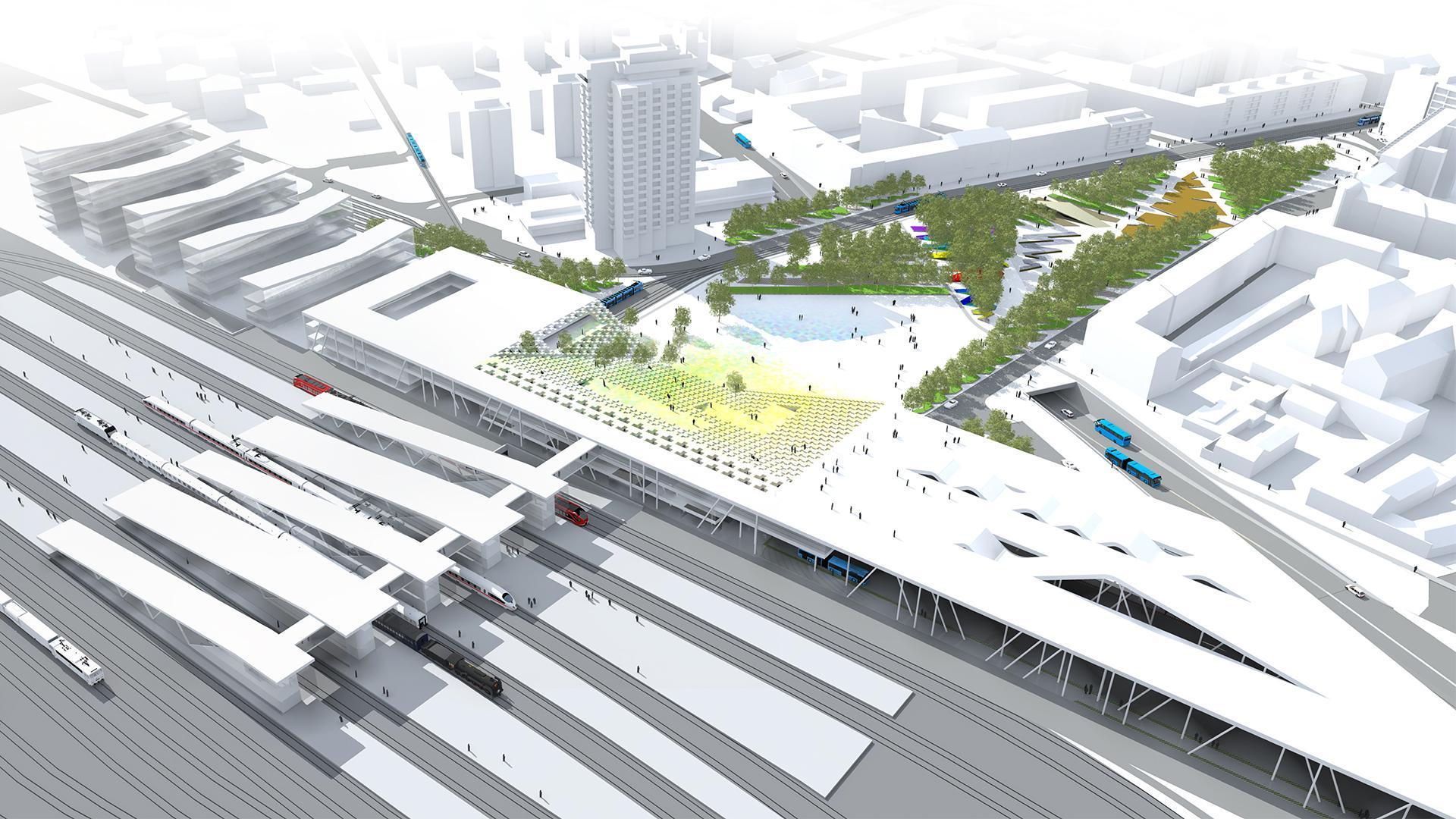 The key aspect of the design was to create an intermodal centre, which is a new meeting point of the city, full of great opportunities and accessible by walk.

The aim of the project was to design a transportation hub connected to the existing railway station, which can handle and connect the different modalities of local and long-distance traffic; while it fits into the urban tissue of the existing market town. If the space system, formed by the functional requirements of the programme, had been included in one single mass, it would have competed with the traditional buildings of the city. Thus, we decided to design it differently from the usual, individual building of an intermodal transportation centre. 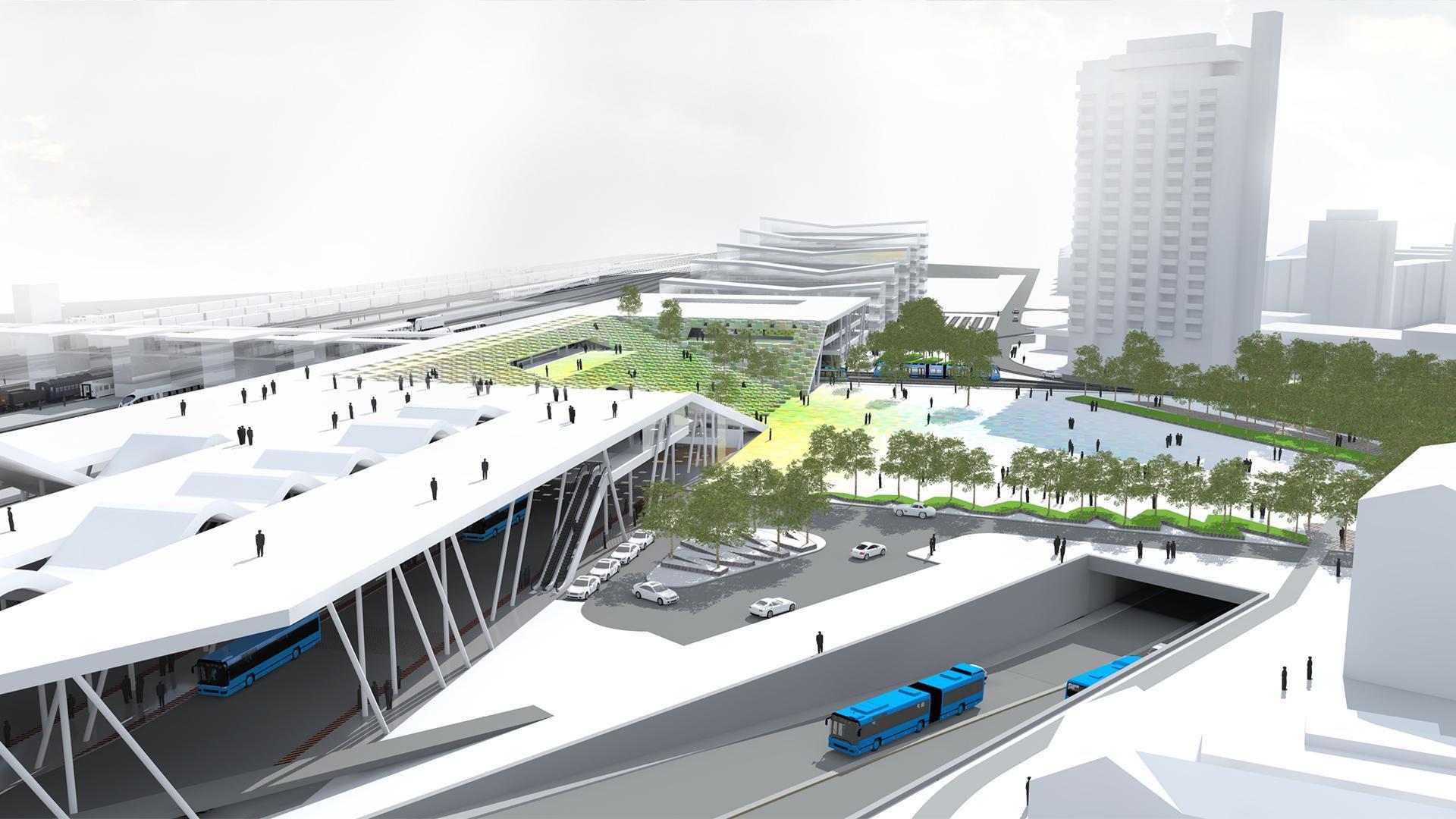 Instead of an 'industrial' transit hub, the vision of an 'intermodal park' emerged: the combination of a city park and a transportation hub, which is unique, lively, and convenient.

According to our concept, the wide, main road will be sunken under the ground at the end of Piac utca, so that a new city park can be developed on the top of it. At a certain point, the new building will vertically open up and become part of the lively green area so that visitors cannot even realize the transition. To the focus point of the park, a new building with an open, two-floor high space has been designed, which will serve citizens with playgrounds, buffets, restaurants, terraces and several other social functions. 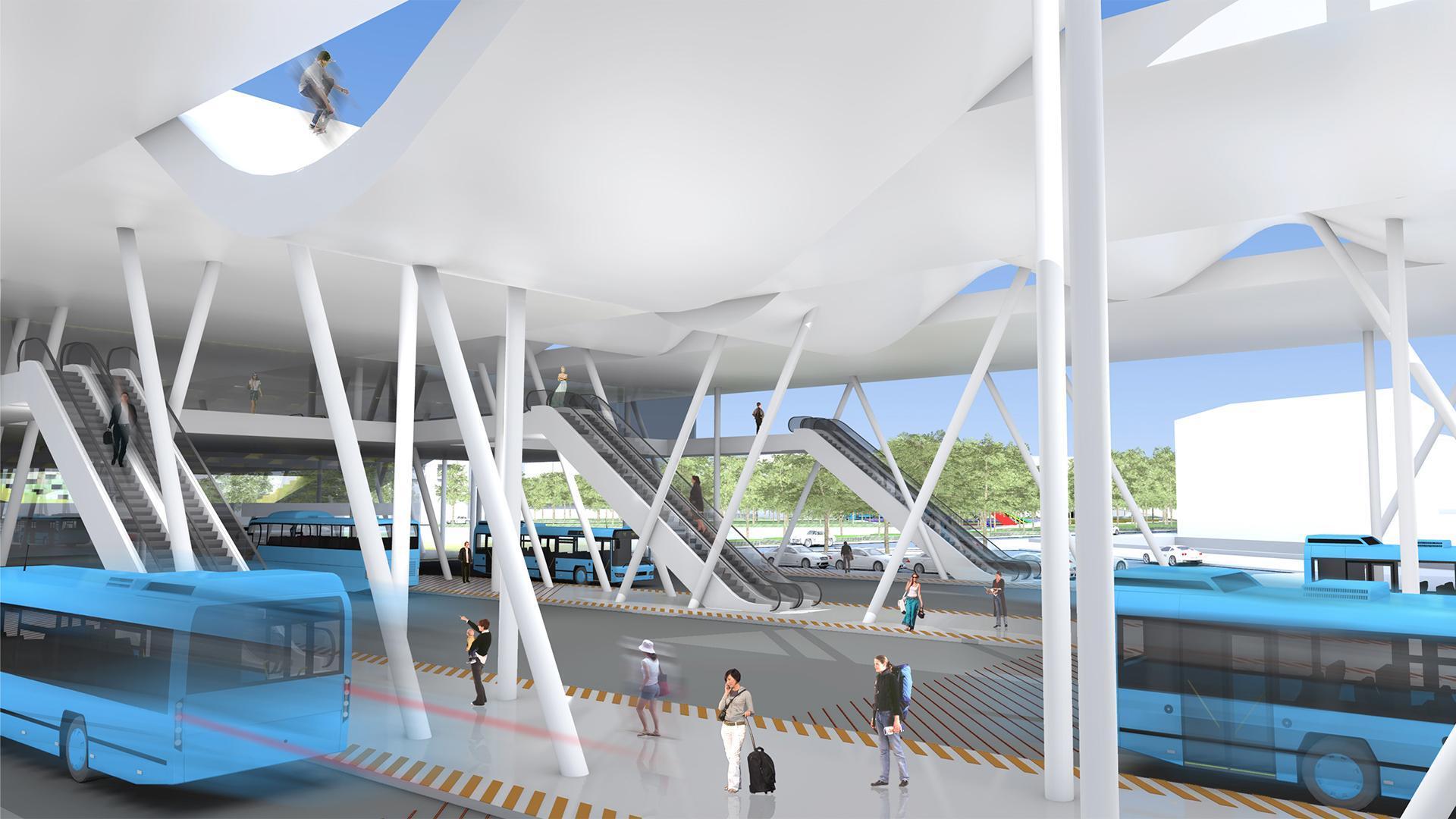 The basic units of the building will be built in a pixel-like regular order based on building blocks like ‘bricks’. These ‘bricks’ can form various social spaces, such as terraces for restaurants or seats and benches for relaxing, while the spaces between them will be filled with park plants. Skylights, created by removing some of the ‘bricks’ will provide the interior with natural light. The transportation hub itself, as well as all service areas and functions will be organized under one, huge, single roof. All means of transport will be connected to the ground level and transfer between the local lines will be possible on the same floor. Platforms for the railway and for long distance buses will be accessible from the first floor, while the parking area will be located under the building.

The transportation hub in our competition entry will become an organic part of the city.

Instead of a cold, industrial environment, a new city park will be created for the local community, which – according to its intended functions – will also concentrate public transportation. Its building mass and appearance will not compete with the iconic historical buildings of Debrecen and yet, with its unique and strong lines, it is a characteristic and worthy closing of Piac Street that functions as an axis between the Great Church and the railway. 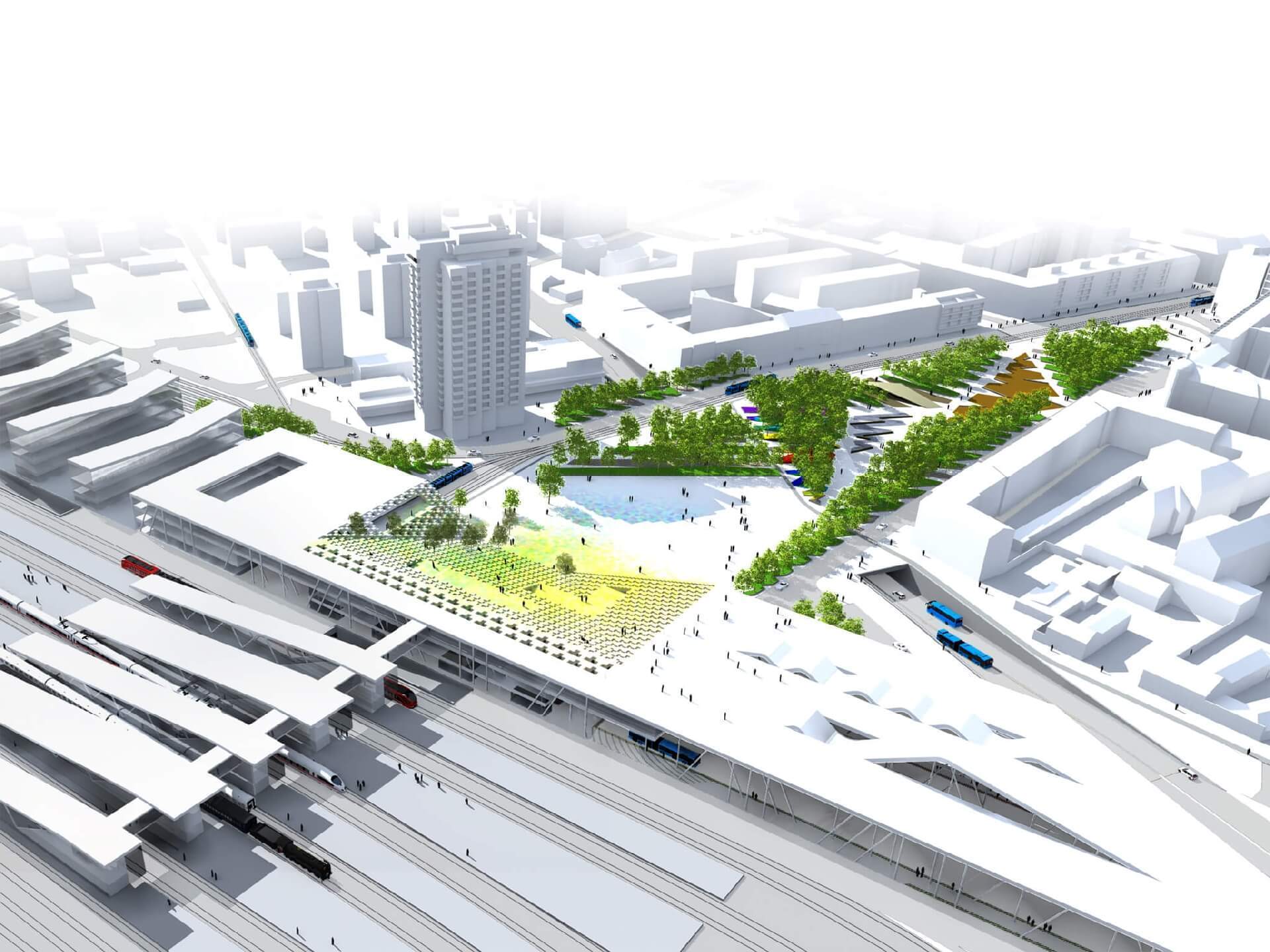 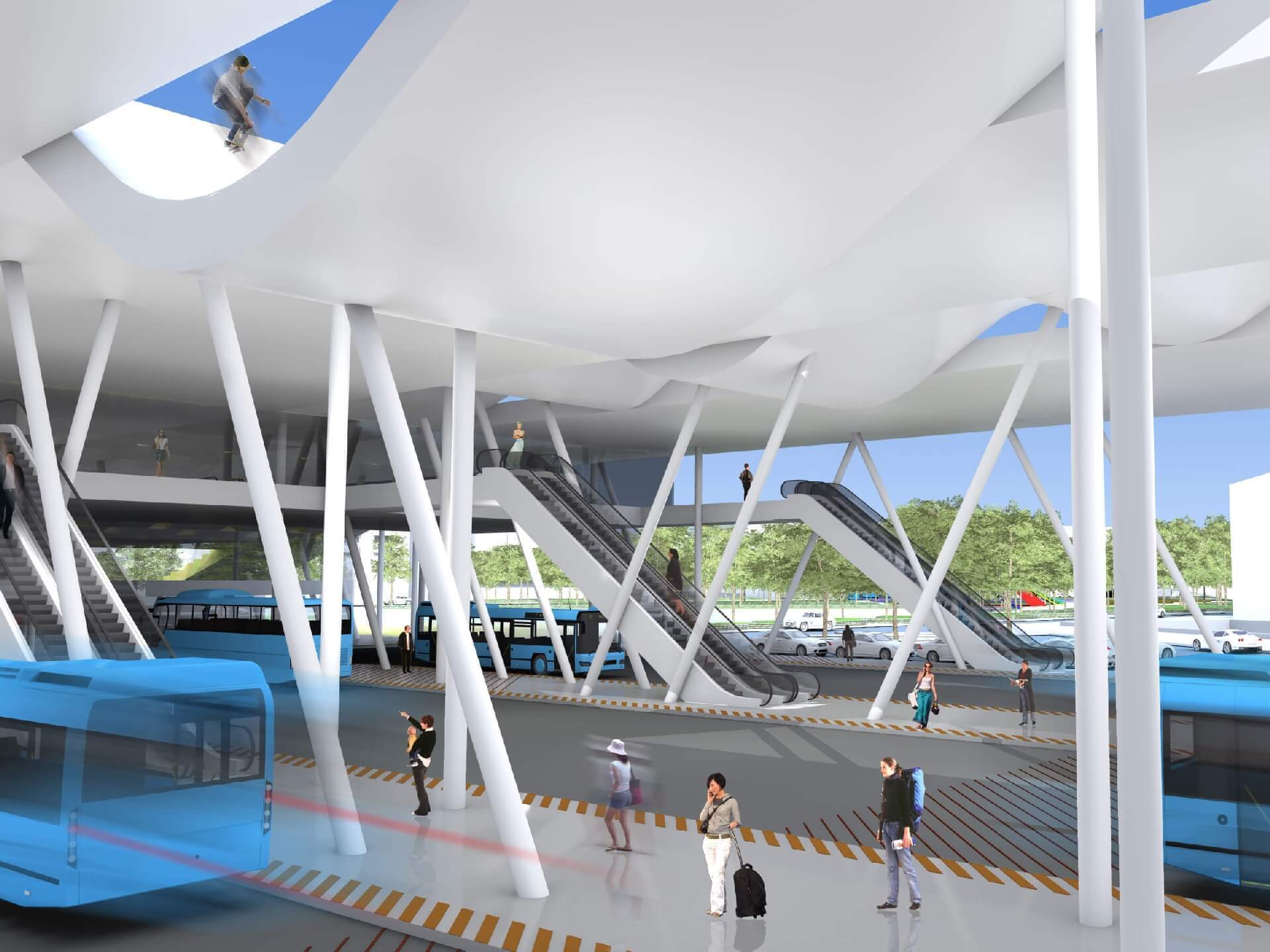 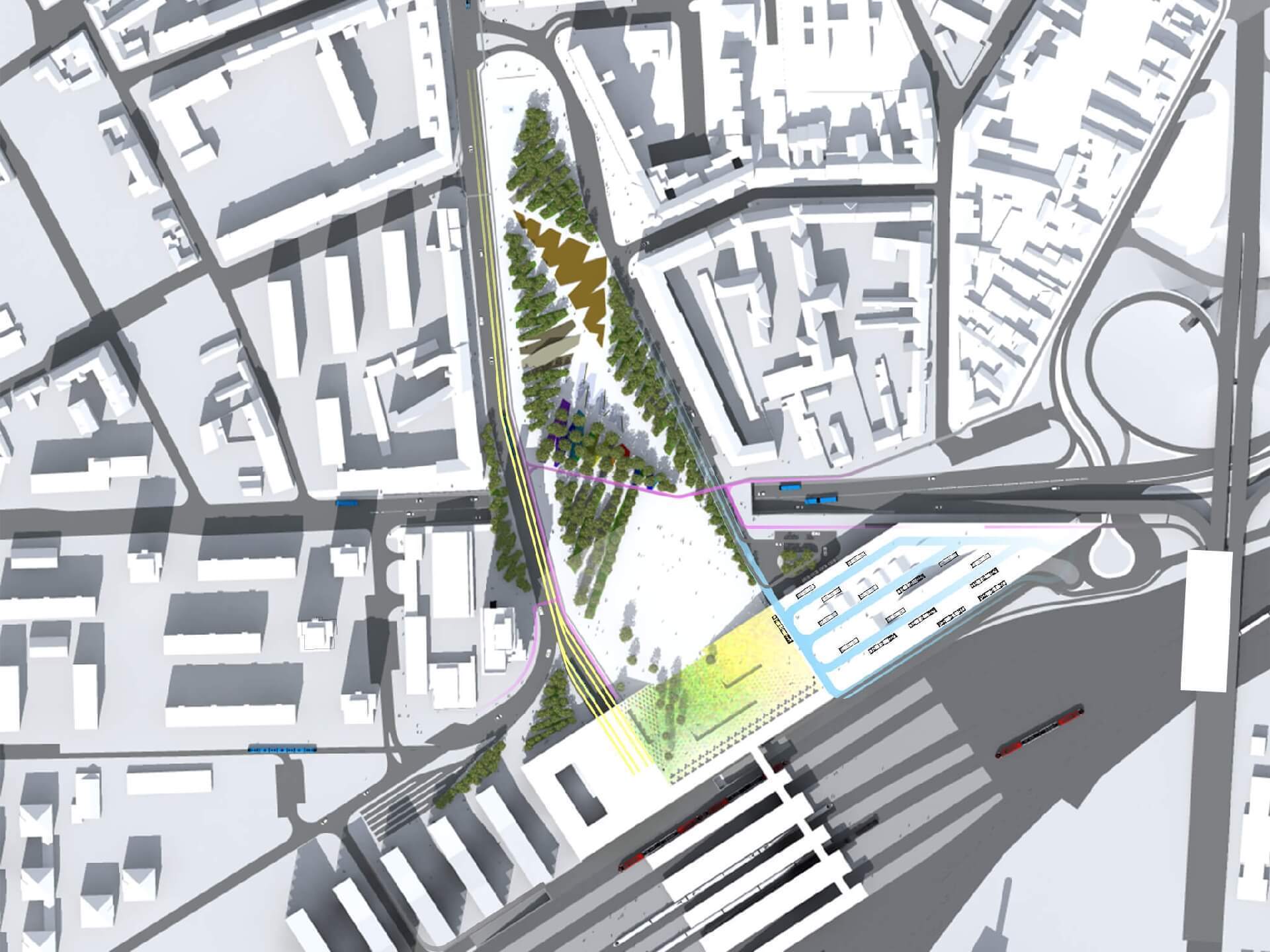 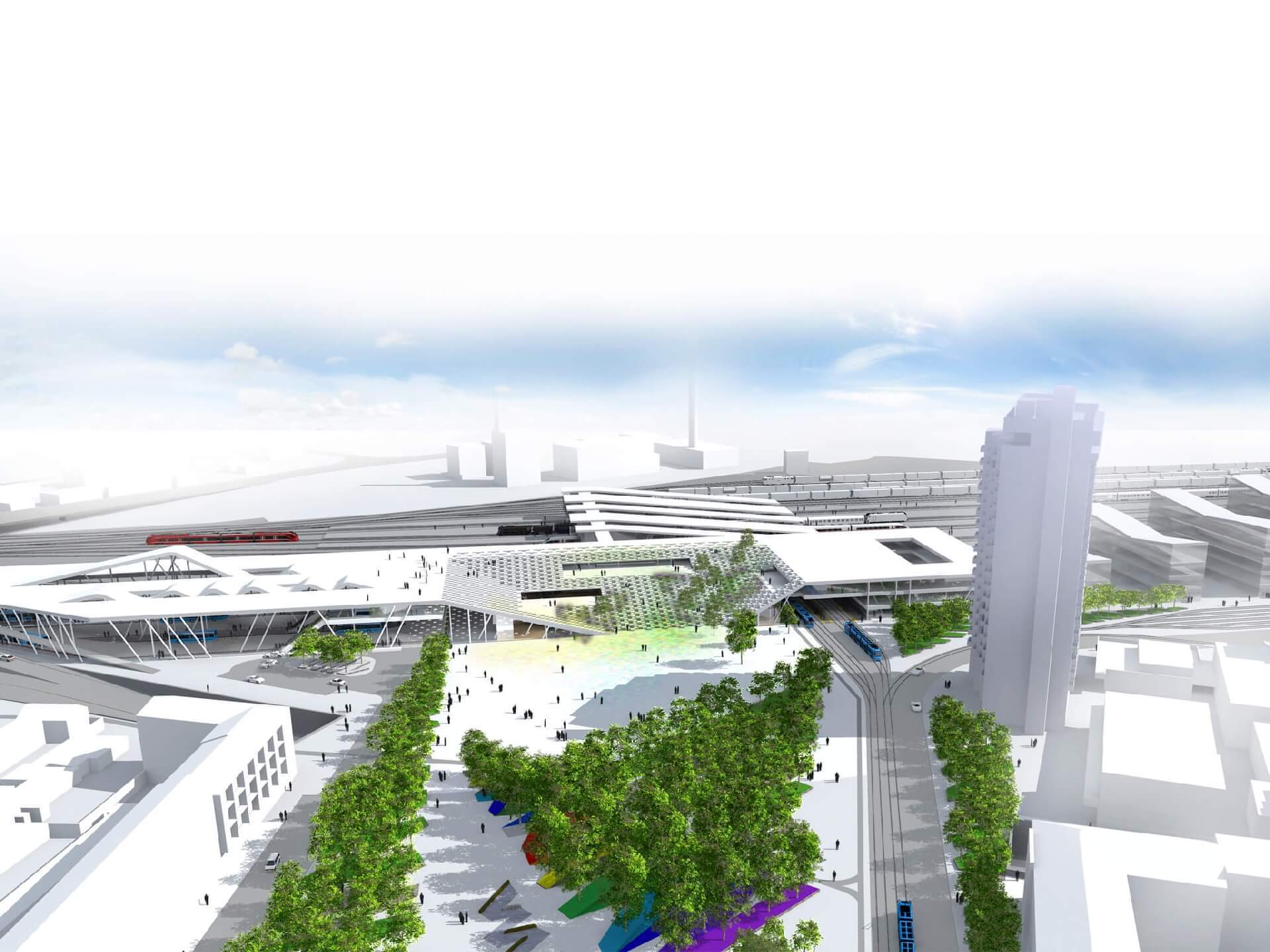 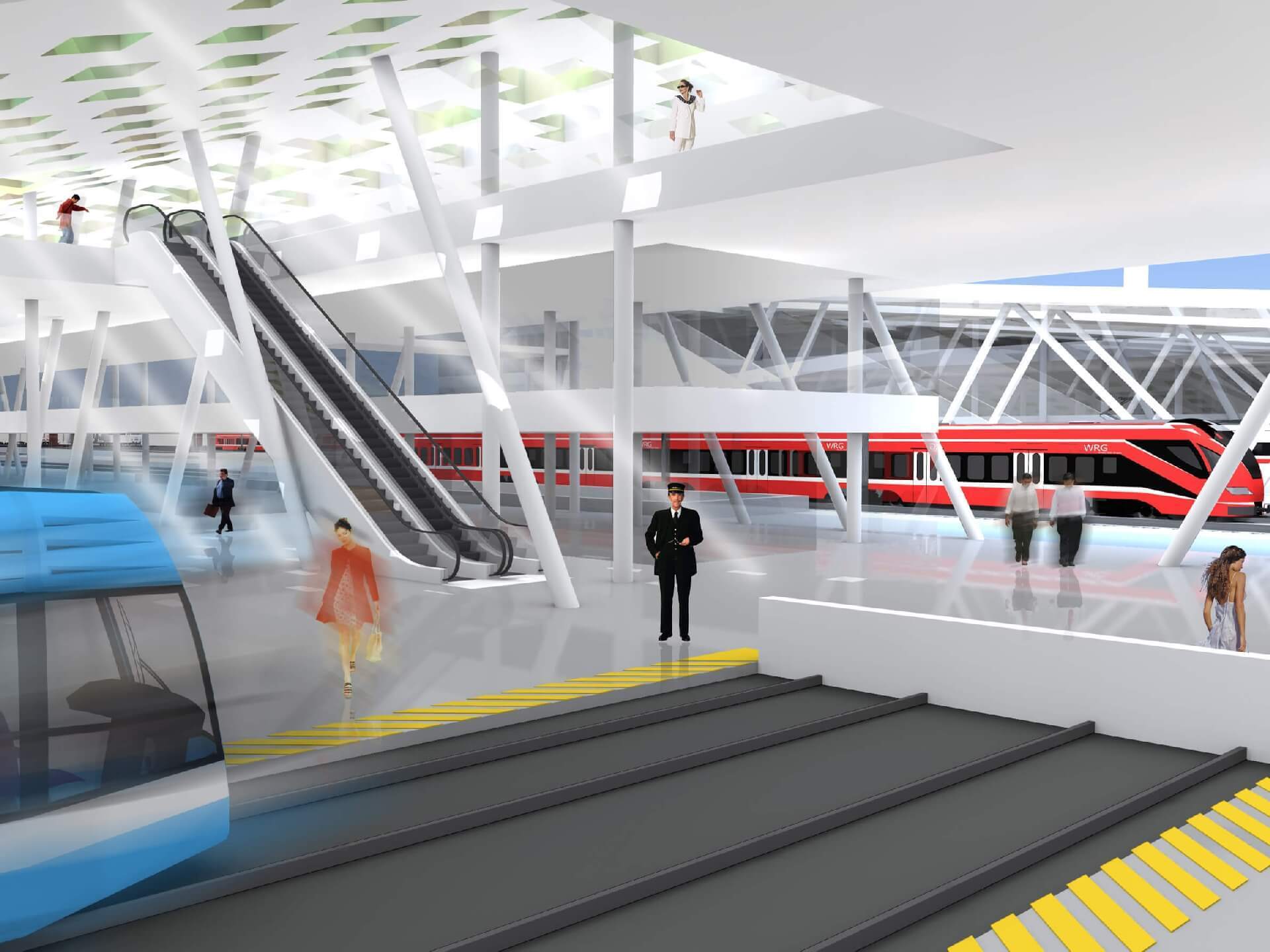 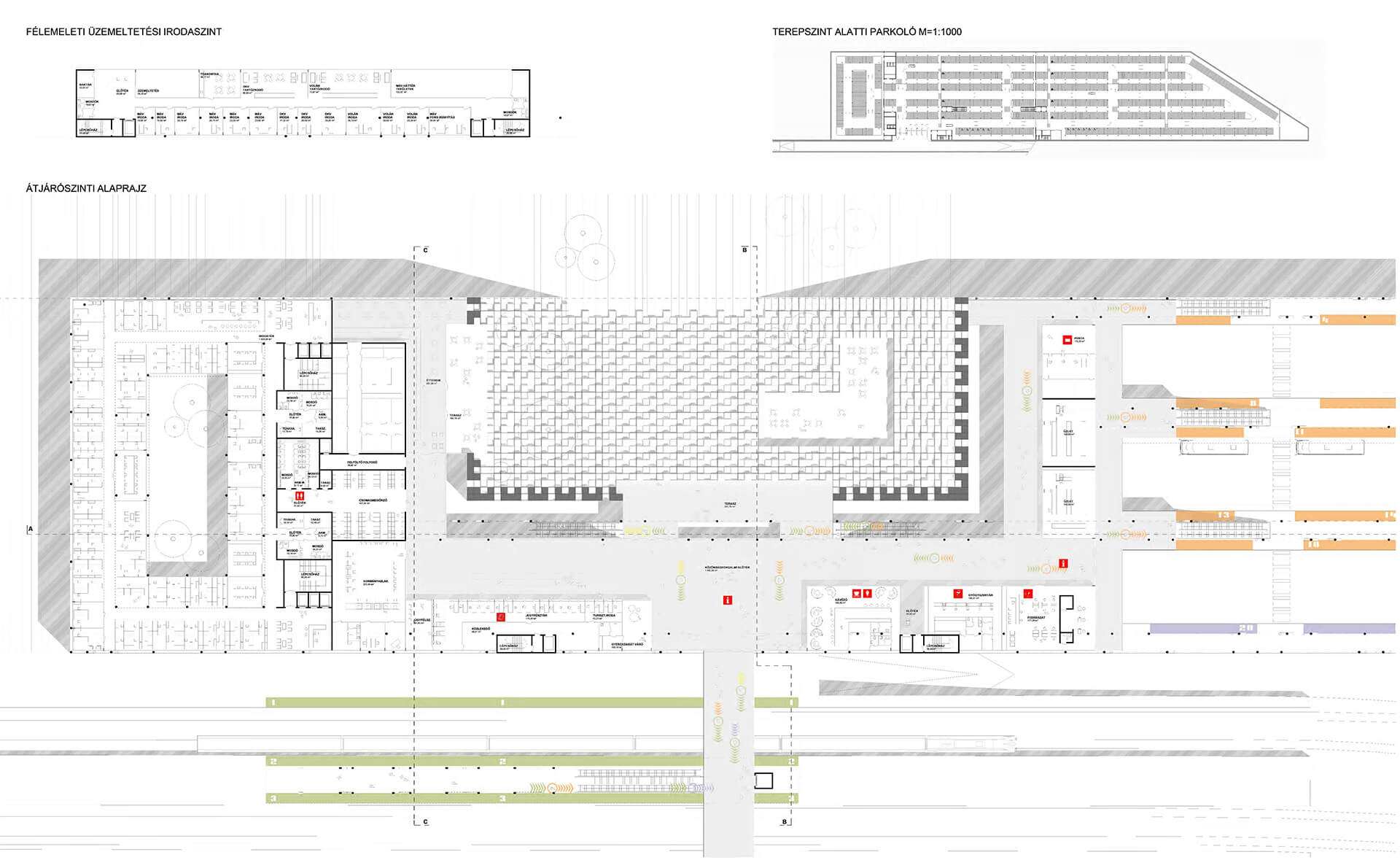